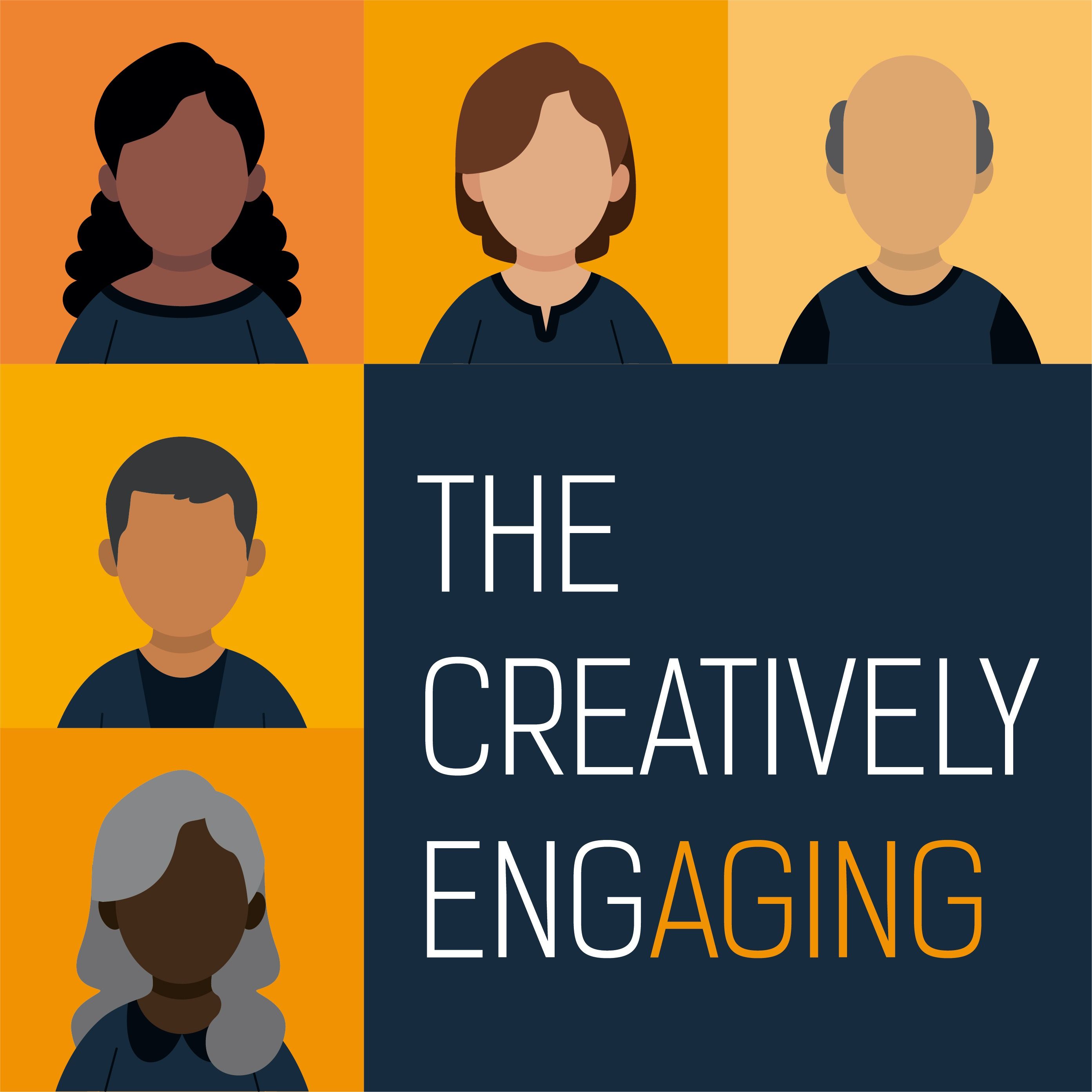 Imagine that you uncovered a "wire" audio recording of your singing from 71 years ago. You were 17 at the time. The recording also has a song on it sung by your mother. Join us as we explore the singing life of Dorothy.

Imagine that you uncovered a "wire" audio recording of your singing from 71 years ago. You were 17 at the time. The recording also has a song on it sung by your mother. Join us as we explore the singing life of Dorothy.

But it was fun while it lasted, just like everything else.

(singing) Imagine that 71 years ago, your mother arranged to capture your voice and hers on a wire recording device. You were 17 at the time, and today you are 88. You haven't heard either recording in a very, very long time. Join us, for a creatively engaging podcast with my guest Dorothy. You had mentioned that the device she recorded on it was a wire.

That's what they told us. We just had an old, plain radio microphone, and they said they would do it on a wire and send it to Vancouver. I didn't make any question.

Where were you doing the recording?

Prince George, in the radio station.

Now, how did you arrange that?

I didn't. My mother did. But, she could do anything in that town. She wanted, she just found out how to do it. She was a high-class English lady who was brought up in West Vancouver. She had went to be a school teacher and she went up north in her first school, which turned out to be nine children in the bush, really in the bush. She had to, that's the kind of life she ended up in. She finally, young men from the town came to chop her wood. My father chopped the most wood, so they ended up in Fraser Lake, which was little sawmill town, but she wasn't allowed to teach there because she was married and had children. Tut Tut. Then all of a sudden there was a war and they said, "Please come." She went and she never looked back. But then when she got to Fraser Lake, she had 40 kids in one room in eight grades. Thought nothing of it. Just did it.

So, in a very rustic part of Canada, you had this woman singing a very refined type of music.

How did that come about?

Well, nobody else could do it. They had weddings. Somebody had to sing. So, we got Eleanor Black. She would go to little towns, either side and she taught music to us in the schoolhouse, but nothing major because we had to learn all the other stuff. (singing)

But, she'd majored in music there. She used to study her music on the street car from the Wharf to UBC. The rest of the homework was done on the ferry. But she was only 15 when she went to UBC, which was ridiculous because she couldn't do any of the fun stuff. She had to come straight home.

What inspired you to take up singing?

Nothing did. I just did it. We were in Fraser Lake and I was singing with the class, my grade eighth grade class. I was the only girl, but I think it was about grade six or seven, I was cleaning the windows of the school to earn myself some pocket money. I went to the piano when I got this song that we'd been told was the competition song for the music festival, coming up in Prince George. I sang it to myself and I learned it just for the heck of it, while I polished windows and I went home and I told my mother I had done this. She said, "Let's go to the piano and see what happens."

"Well," she said, "That's pretty nice," but she said, "I hesitate to send you to Prince George, because I've heard some very sophisticated music come out of that city." I said, "Okay, I don't care. I just did it for the fun of it." We went to Prince George for other reason, other musical things, and I was in the library sitting way up in the last row, and they were, senior girls singing was going on. When the second to last one came on, I saw my mother get up and go and talk to the judicators. The next thing they're going like this. So, I went down. "Would you like to try this?" I said, "Sure." I happened to come in first, which was kind of crazy.

You had no formal training?

You just learned how to sing washing windows?

Yeah, but I also hadn't had time to get all nervous or anything. I thought this was all kind of crazy.

How did your mother react? How did people in the audience react?

Well, they thought it was just fine. My mother just, she's cool. We went back home and I finished out my year and we had to move to Prince George, so I could go to high school because there wasn't one in that town. There was no time for music. I did sing in the church choir, which my mother ran. There was two of us youngsters from the high school. There was another girl, who's the dentist daughter. We were singing in the soprano section and Mother came to us one day and she said, "I'm going to have to ask you to sing with the soprano section and the seniors." She said, "The elderly ladies will not make you feel welcome, but just hang in there." Then, eventually I moved over to the alto side.

Any moments that you had singing, as a younger woman, that really stand out for you?

Then, in senior high school, there was a competition. I did enter that one, unsuccessfully. [inaudible 00:08:04] I sang one in Prince George and I won it. I got sent to Vancouver, with not enough preparation for the big city, and I messed up tremendously. I had new stage knowledge, all that stuff. Donald Bell was one of them competitors. You see him on all the labels. Most of us got beaten, but me worse than all. That was okay. When I was senior year, we were having a festival, the senior year and our class was going to be wild and crazy. My friends were all doing the CanCan. Well, I can't kick that high. Never could.

They said "You are going to sing summertime. I could just belt her out. It was kind of fun. Then, I graduated. I went to California, and sometimes in the bars I used to sing. There was one place near home where if I came in, she'd look at me and she'd start playing some of the things she knew I knew well. She didn't try to make life difficult for me. Then I started studying there, but it was hard to ... they didn't have the money to pay for it, really. I just needed help with my singing.

I never learned how to play the piano. That went on, off and on. Then, I got married and I started voice lessons in Arizona. Then, I got the cancer, which destroyed my ability to do that. I couldn't continue with it for the longest time. Then, I got better and I started really working at it, but it was fun, because I came to Sechelt, and I was looking in the paper and I saw an advertisement for a young woman who was, who was helping people train their voice. I went over. I said, "I don't really think I want lessons. I just want to know if it's there," because I had done nothing for 20 years and she played something and I did ... She turned around with a big [inaudible 00:10:58] "Oh yeah. It's still there." We dug it out and I had another 10 years of singing at St. Bart's.

When did you notice your voice start to fade?

I can't remember. I think, probably, when the choir dissolved, so did I. I knew, I remember my mother saying that her voice disappeared in her seventies. I said, "It's nonsense, Mother," for which I'm ... It was somebody getting even with me for being so snotty. She told me one day, she'd gone into a nursing home in North Van, to see her old music teacher. She started down the hall and she saw through the door that this lady is sitting there, erect, trying to get some notes out, and she couldn't. Mother said she was crying so hard, that she had to leave. I mean, it happens to everybody, but to this lady, it was so important because she'd taught for so many years.

That would have been a very powerful moment for your mother.

I know that you've really, you looked at different options for pursuing and getting your voice back and potentially to sing. Do you feel that you're not going to be able to sing at all?

How do you maintain your passion? Because you still, when you talk about voice and singing to me, some people will have a tendency to say, "I can't sing anymore. I'm not going to talk about it. I don't want to look at it."

Well, I think that's crazy. I mean, I can't high jump anymore either, but if you want to talk about it, that's okay.

I just don't want to hang around a room where everybody's group singing because I want to join in so much. It's just, I just want to be somewhere else.

How did your mother support you in your singing and recognize you? Do you feel that she was a great support for you to encourage you to move along?

She did, but she was very careful because I was an independent as a young colt. If she tried too hard, I'd have immediately said, "I'm not doing it." Sorry. I'm that way. But I am.

That's quite all right. Dorothy. You don't need to apologize for that. Dorothy, thank you for being a guest on the show today. I'm just wondering if you have any final words or comments that you would like to make about your singing life or the recording that you did at the age of 17.

It's been a long time. Sometimes, I can't believe that it was me, but I knew it was. (singing) But it was fun while it lasted, just like everything else.